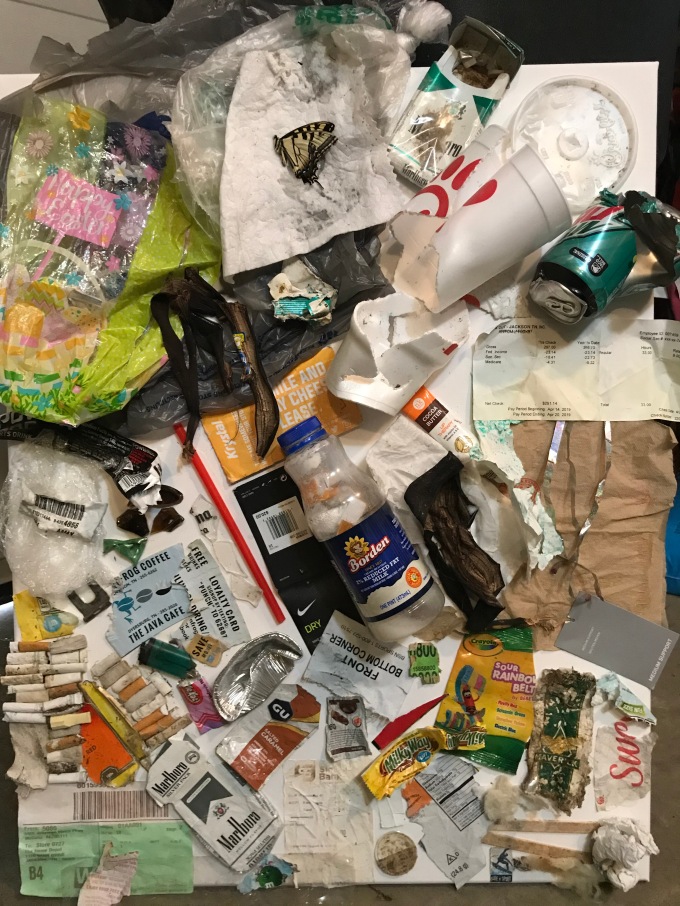 This garbage is titled 1 Mile.  This garbage is specifically brought to you by a 1 mile section of Pleasant Plains Rd. between West Jackson Baptist Church and Union University. Among runners in Jackson this stretch is often called “the hill at Union.” Really “the hill” is a long slope, but the honest to goodness mountains are hours away in east Tennessee.

This is not all the garbage that was available. I chose not to pick up a bunch of broken glass and beer bottles with beer still in them. I was not going to pick up cigarette butts, but there were so many that I felt a true representation of garbage had to include cigarette butts. This garbage is from one side of the road. It was tempting to cross the four lanes, because there were 2 plastic bags bulging with trash on the other side. I could have plucked up those bags and had enough refuse for a whole other collage, maybe I would title it Mile 2.  Traffic was busy as it was nearing lunchtime, so I chose not to cross the road.

There is a hashtag on Twitter, #plogging, which stands for plucking and jogging. That’s cool, I suppose, I mean you get a run in with some extra squats and help the environment, but maybe…never mind, I don’t have the answer.

I did not set out to “plog,” but I guess I did. Look at me being all trendy and hip, but what I mean to say is that it would be so much more trendy and hip if we did not litter in the first place.